Manufacturing sector slows further at the end of 2015

The end of 2015 saw the rate of growth in the UK manufacturing sector slow further from the recent peak reached in October. At 51.9 in December, the seasonally adjusted Markit/CIPS Purchasing Manager’s Index® (PMI®) slipped back towards its long-run survey average of 51.5.

Over the final quarter as a whole, the average readings for the headline PMI, Output Index, New Orders Index, New Export Orders Index and Employment Index were all above their respective averages. However, averages over 2015 were in each case below those achieved in 2014.

Manufacturing production rose for the thirty-third month running in December, underpinned by higher intakes of new business from both domestic and export clients. The consumer goods sector remained the prime driver of production and new order growth, despite seeing its rates of expansion ease over the month. Similar decelerations were also seen at intermediate and investment goods producers. 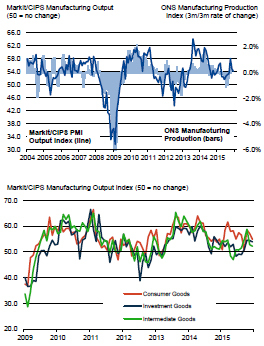